The Future of Taiwan 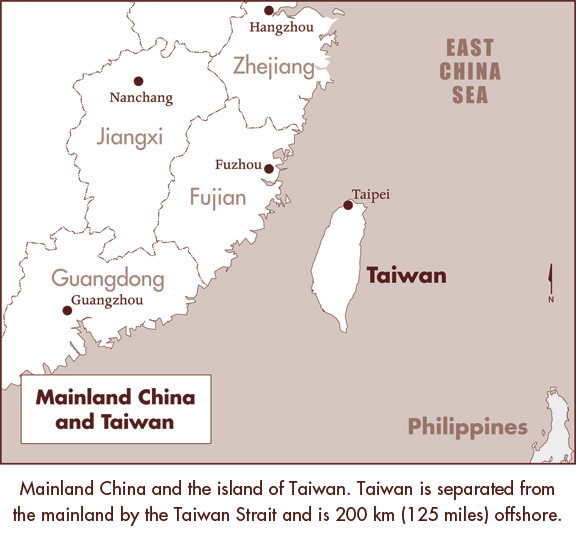 A look at the history of Taiwan’s relations with the mainland reveals why some analysts fear Taiwan may one day become the cause of war between China and the United States.

To understand how China approaches its “renegade province,” Taiwan, it is useful to know a little bit about the island’s history. Taiwan’s first residents, who make up the island’s aboriginal tribes, migrated to the island about six thousand years ago and are related to ethnic groups from southern China, Southeast Asia, and the Philippines. They now constitute just over 1 percent of the total population. Although Taiwan appeared in Chinese historical records before the Han dynasty (206 bce–220 ce), the colonization of Taiwan by Chinese settlers began only in 610 ce. The next large migration of Chinese to Taiwan started in the twelfth century. During the Ming dynasty (1368–1644), many Chinese settlers in Taiwan were ordered to return to the Chinese mainland by imperial edicts. However, Chinese pioneers continued to migrate to Taiwan in spite of the imperial prohibition. By 1683, when the Qing dynasty (1644–1912) took control of Taiwan, the island’s population exceeded 2.5 million, most of them from China’s Fujian and Guangdong provinces. In 1885, the Qing dynasty made Taiwan China’s twenty-second province.

During the last decades of the Qing dynasty, China experienced economic difficulties and political chaos, one consequence of which was loss of territorial control of portions of its eastern seaboard. At the end of the first Sino-Japanese War in 1895, Taiwan was ceded to Japan. Japan retained control of Taiwan until the end of World War II.

Relations under the Two Chiangs

In 1911, the Manchu empire on the Chinese mainland was overthrown by a nationalist revolution spearheaded by the Guomindang (Kuomintang) under the leadership of Sun Yat-sen and Chiang Kai-shek. They established the Republic of China, which, as an ally of the United States during World War II, received promises that at the end of the war, Japan would be forced to return Taiwan to China. That event occurred on 25 October 1945, and thus Taiwan became a province of China again under a Chinese mainland administrator, General Gen Yi. In 1947, there was a small uprising by native Taiwanese protesting government corruption, but it was brutally suppressed on 28 February by the military.

Meanwhile, the mainland was experiencing a civil war, which ended in the victory of the Communist forces of Mao Zedong and the establishment of the People’s Republic of China in 1949. Chiang Kai-shek fled to Taiwan across the Taiwan Strait with more than 2 million mainlanders and reestablished his government there in 1950. Most native Taiwanese dissidents had fled to Japan or to the United States after the 1947 massacre; the population that remained warmly welcomed Chiang and his followers, whom they hoped would restore order and rebuild the economy.

It was widely expected within the United States that Mao’s forces would soon invade Taiwan, but the outbreak of the Korean War on 25 June 1950 proved to be the island’s saving grace. Fearing the spread of Communism across Asia, U.S. president Harry Truman immediately ordered the U.S. Seventh Fleet to defend Taiwan. Mao’s troops on the mainland, virtually without a modern navy and air force, were in no position to challenge the U.S. Seventh Fleet. In May 1951, the United States established its official Military Assistance Advisory Group in Taiwan to train Chiang’s refugee troops. By 1954, Taiwan received a total of $4.2 billion in military aid and $1.7 billion in economic aid from the United States. These assistance programs, plus a 1954 Mutual Defense Treaty with the United States, helped Chiang Kai-shek to build up Taiwan from an impoverished and threatened island into a strong modern state.

During his twenty-five years of authoritarian rule, Chiang Kai-shek focused on preventing the spread of the Chinese Communists’ power to Taiwan. He was not in favor of an independent Taiwan, but rather considered the island as a base from which to fight Mao’s Communism and to recover the mainland by any means at his disposal. He forbade all forms of contact with the Communist-controlled mainland, including such seemingly trivial activities as reading mainland newspapers, listening to mainland radio broadcasts, or even receiving mail from friends or relatives still living on the mainland.

After his death in 1975, the real power in Taiwan fell into the hands of his son, Chiang Ching-kuo, who was formally elected to the presidency in May 1978. Like his father, he absolutely opposed any demand for Taiwan’s independence and believed the ROC would one day regain control of the mainland. Unlike his father, however, Chiang Ching-kuo took significant steps to relax tensions with the Communist mainland government. He permitted indirect trade and contacts with the mainland, and in October 1987, he lifted the ban on traveling to the mainland.

On the mainland, there was a shift in policy away from advocacy of military reunification; this occurred in 1978, when the third plenum of the Eleventh Chinese Communist Party Congress adopted a resolution calling for peaceful reunification.Chinese leaders shifted from their militarist stance because of their desire to normalize relations with the United States, which occurred in 1979 under President Carter.

Relations under the Native Taiwanese Leaders

The death of Chiang Ching-kuo in 1988 opened a new era in Taiwanese politics. A native-born Taiwanese, Lee Teng-hui, succeeded him. Since then Taiwan has become a more democratic and pluralistic society.

At first Lee Teng-hui continued his predecessor’s open-door policy toward the Chinese mainland. Lee established the National Unification Council under the auspices of the President’s Office (the White House of Taiwan). In February 1991, the council adopted “Guidelines for National Unification,” which outlines three phases of unification: short term (exchange and reciprocity), middle term (trust and cooperation), and long term (consultation and unification). However, Lee refused to set a timetable for the implementation of the guidelines.

Lee Teng-hui also authorized the establishment of a semiofficial Strait Exchange Foundation (SEF) to make direct contact with the Chinese mainland’s counterpart organization, the Association for Relations across the Taiwan Straits (ARATS).

The Chinese Communists have always maintained that Taiwan is a Chinese province that must be reunited with the mainland. Their plans to achieve that goal have varied. Before 1978, the official policy was to use military force. In 1978 the third plenum of the Eleventh Chinese Communist Party Congress adopted a new resolution calling for “peaceful reunification” with Taiwan. Beginning in 1983, Deng Xiaoping made a number of concessions to Taiwan, and in early 1984 China offered a proposal that would take into account Taiwan’s political and economic concerns: the “one country, two systems” proposal. “One country, two systems” continued to be China’s official policy under Jiang Zemin.

Relations between China and Taiwan became extremely tense again in 1999. At that time Lee Teng-hui introduced a new element by insisting that negotiations must be based on a “special state-to-state” relationship. As a result, in 2000 China published a white paper, “The One-China Principle and the Taiwan Issue” in which it declared that China “cannot allow the resolution of the Taiwan issue to be postponed indefinitely.”

A political earthquake erupted in Taiwan on 18 March 2000, when Taiwanese voters elected a pro-independence candidate, Chen Shui-bian, as president of Taiwan with 39 percent of the votes in a three-way race. China immediately demanded that Chen accept the “one-China” principle before any negotiations between China and Taiwan could be resumed. Chen rejected China’s precondition for negotiations and has shifted Taiwan’s policy away from unification by taking symbolic actions to emphasize Taiwan’s separateness from China without declaring independence—for example, he has stated that Taiwan is already an independent, sovereign country with no need to declare independence. Chen was reelected for a second four-year term in 2004.

Nor did things become less tense with the passing of China’s presidency from Jiang Zemin to Hu Jintao in 2003. In March 2005, China passed legislation authorizing the use of force against Taiwan if the latter made any moves toward formal independence. Rather than backing down, however, Taiwan appears equally resolute in its position: in January 2006 Chen proposed abolishing the National Unification Council. He continues to reject the one-China principle.

Within the next several years, China ’s relations with Taiwan will be more complex. Currently, China is publicly seeking a peaceful solution regarding the future status of Taiwan, especially because China is hosting the 2008 Olympics in Beijing and the government wants to use this opportunity to present an image of China as a peace-loving nation to the world. However, Taiwan’s so-called “creeping independence” under Chen Shui-bian has certainly irritated China’s leadership, especially the military. As China gains economic momentum as a world-class power, the Chinese leadership may decide that the cumulative impact of Chen’s creeping independence requires a military response to restore credibility to China’s assertion that Taiwan is a lost province to which China lays claim.

On the other hand, if economics is the key to world politics in the twenty-first century, the future of China-Taiwan relations appears bright despite political upsets. In 2006, there are more than a million Taiwanese who maintain permanent residences in China . The Chinese mainland is now Taiwan’s largest single trading partner. Exports to China, for example, accounted for almost 26 percent of Taiwan’s total exports in 2004, and the Chinese-Taiwanese cross-strait trade reached $61.6 billion in 2004 and continues to grow. Furthermore, Taiwan has enjoyed a handsome trade surplus with China every year since 1980. Therefore, despite their rocky history, there is hope for better relations to come between China and Taiwan.